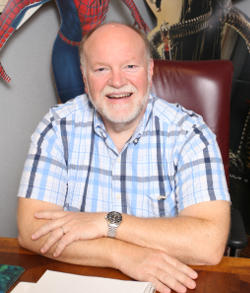 The International Association of Venue Managers (IAVM) is pleased to announce the nomination of Michael Marion, CFE, for 2nd Vice Chair of the IAVM Board of Directors, a prestigious honor denoting exemplary leadership and dedication to the sport, entertainment, and convention/exhibition industry. In this role, Marion will become a senior officer of the organization, serving a four-year term, ascending to the chairman position in 2018-2019.

Marion is general manager of the Verizon Arena in North Little Rock, Arkansas, where he has been employed since 1997. In 2004, Marion was named Pollstar magazine’s “Facility Executive of the Year.”

“To use a worn cliché, it’s an honor to be nominated. Working in the concert business has been a wonderful experience the last 40 years and I really have enjoyed the friendships I’ve made through IAVM,” Marion said. “I look forward to working with the current and future leadership of IAVM to advance our profession for a brighter future. This should be fun.”

Marion previously worked as program advisor at Mississippi State University, booking such artists as Billy Joel, Bruce Springsteen, and Earth, Wind and Fire. In 1982, he moved to Los Angeles and worked as an agent for Triad Artists. In 1988, he moved back to his hometown of Tupelo, Mississippi, and became director of the Tupelo Coliseum, presenting such artists as Tom Petty, the Eagles, and Reba McEntire.

“Michael Marion is an esteemed professional colleague and valued personal friend to so many of us,” said Kim Bedier, CFE, chair of IAVM’s Leadership Development/Nominating Committee “I am excited for him to bring his unique style of leadership to influence the future of our association.”

He follows in the path of several predecessors who, over the past 90 years, have helped to shape the industry, and ultimately, the communities they serve. IAVM members will vote electronically on this nomination, and, if elected, Marion will take office in July during VenueConnect, IAVM’s annual conference and trade show, July 23-26, in Minneapolis, Minnesota.